How to challenge the dachshund… 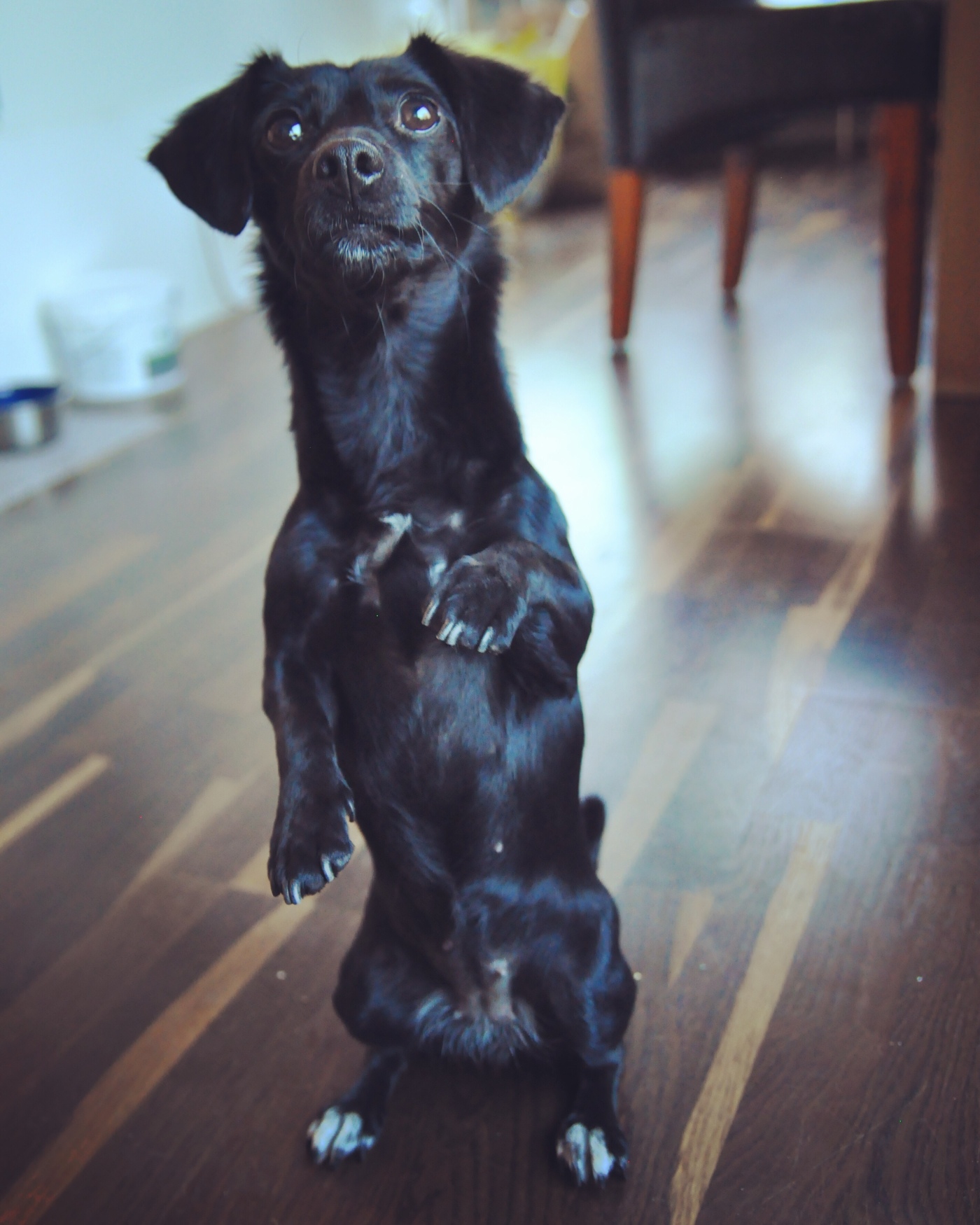 Mimi is a dachshund mix. Smart but independent.

My old dog was extremely keen to learn tricks. She was a completely different breed.

Mimi always watched us. Soon after we got her, I started practising with the little one as well. I quickly realized that I need to be a lot more patient and have to use different techniques with our little sausage.

We started with a Mimi, knowing how to do “sit” and “lay down”. And those two she learned by watching me and Paula interacting. She copied Paula’s behaviour.

The next one we tackled, was “turn around”. I speak German to Mimi, so I’m not too sure how to translate the commands properly… For “turn around” I took a suuuuper good smelling treat. I held it right in front of her nose and then led it in a tight circle around her body, trying to make her follow it with her nose. At some point, she has to get up and spin herself around. If she did, she got the treat IMMEDIATELY.

It sounds so easy, but it needed a lot of repetition. And just when you think that she will never do it, she suddenly spins like it’s the easiest thing in the whole world.

Then we practised “paw”. This one was not so hard, because I used her natural behaviour for it. She naturally uses her paws to ask for attention. so, while it’s usually an unwanted behaviour, I always waited for a situation where she usually would do it and then just say “Paw” in exactly the moment she does it. I also put my hand under her paw. That way she linked the command and the gesture to the movement and learned pretty quickly that, if she does it right, a treat comes her way.

Why he gesture? Just because it’s a thing that I did with my old dog. There was a time, when I had health issues and not able to talk properly or do a lot of exercise with my old girl. So we practised a sign to every command. And pretty fas I noticed, that the non-verbal commands got executed so much better than the verbal ones. It’s no bound to the melody or emotion that influences my voice I guess.

There’s one trick, that took a while because she didn’t have enough muscles to do it. Meant is “sit pretty”. Here she sits on her butt and lifts her (long) upper body straight up. She looks like a black meerkat when she does that. In the beginning, she always fell to one side. his trick is one of her favourites by now. I don’t know why…

Another tricky one was “roll over”. I started with making her lay down. Then the procedure was very similar to “turn around”. I held a treat right in front of her nose and then lead it close to her body around her head. When she wanted to follow it (to get it), she had to roll her whole body around. This one was tough because Mimi hates to give up control by laying on her back. No matter how short or long.

So, we had to work on trust and leadership.

Much repetition later, she made it once and I was the happiest. I made such a celebration out of it, that she almost looked a bit proud. And since then, she sometimes offers this trick with being asked, when she really wants a treat I have in my hand.

Still in progress is “play dead”. That famous one, where she drops “dead” on command. So far, impossible to make her lay down relaxed long enough.

Here is a link to a youtube video of mine, where you can see her do those tricks: